From my house in Greece there was no man made light, so the nights were very dark, especially when the moon was in wane. Halfway through one moon cycle she does not appear until after sunset, and then each night it is about 50 minutes later until soon, when the lingering light on the setting sun are totally gone, the stars shine with an astonishing brightness. I have never been in that kind of darkness before and the night sky was overwhelmingly awesome. I love the moon, but was also happy when she was not in the sky, as when she was there the starlight reaching earth was so diminished.

As the moon rises dewy-fingered
in the sky
Stars near her cover their own
bright faces
In awe of her silvery light
Sappho of Lesbos: 630-570 BCE.

I felt two powerful sensations whenever I lay in the field and watched them. One, I felt totally insignificant, and overwhelmed by the vastness of the sky and the infinite number of stars, always there but hidden in our light polluting world. The second thing was how totally connected I felt to some universal unity, as if there was a connections between me, and all that existed. A microscopic part of all there is…of all of Life.

I have felt this same feeling when during my annual residential seminars on the island when we conducted proofings and as the group drifted in and out of the substance energy. This was especially so during the proofing of DNA. Although in all our enhanced proofing this happened to a degree, but with the DNA it was especially potent.

My favorite constellation came to be Dracona, or the dragon that wraps itself around Polaris, the North Star, that is the one that helps us find our way, giving us a sense of direction. For most the entire Northern Hemisphere the dragon never sets below the horizon, ever guarding, unseen during the day and showing itself in the dark nights. This constellation drew my attention to such an extent it became a sort of confident of mine. We had many cross communications over the twenty years. While gazing at it one night the thought came to me that I had made a lot of flower essences (as opposed to Tree Essences) and that they were like the stars in the heavens but they had more color to them. They disappeared from view at night but were like daytime stars. Like the chakra below the Earth they were like EarthStars.

I wondered how to integrate them when the thought came to me to make astrology harmonies using the essences from small plants along with the trees. 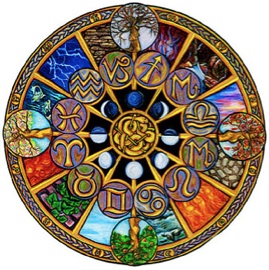 What made most sense to me was to use the twelve sun signs of the zodiac that most people know something about, but I had to add the Dragon Guardian as well. The last one I made was the Dragon. I felt it needed to be added as the lucky thirteenth constellation, guarding all the others. At the time, I thought the idea of a thirteenth zodiac sign was a piece of magical nonsense, but much later I discovered that, there actually was one. My only expression for this revelation is“gob-smacked.” The constellations name is Ophiuchus, which features a serpent. It may not be the same as Dracona but the idea of a serpent and a dragon symbolizing similar images of guardianship was deeply intriguing me.