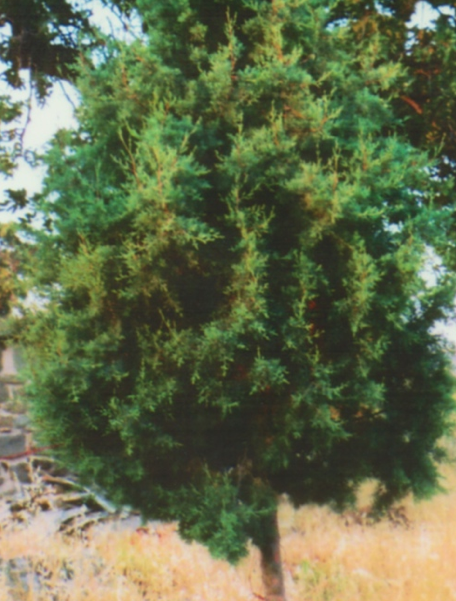 This tree is related to cypress and tamarisk. It is a smallish slow growing evergreen, rich in scented resin. The name Arbor vitae, is Latin for “tree of life, due to the medicinal properties of its sap, bark, and twigs. The largest trees are found in North Eastern North America, where they are native. In the 15th and 16th century they were

introduced in frequently visited ports when it was discovered to be a cure for scurvy. The area surrounding the port of Eressos, where all of these essence trees grow, was a major port-of-call for ships sailing up to Troy and through the Bosporus to the Black Sea ports. Perhaps this is how they arrived on Lesbos.

This lovely fragrant tree resonates with the Third Eye or Brow Chakra, but this time it is about the initiation of the descent, bringing the sky energy back down to this place of visioning. In the descent, it is about clearer self-visioning. ‘To thine own self be true.’ It is about embodiment of self-identity.

“I don’t know who I am. No one really knows me, or understands the ‘real me’. I am cut off from the world. I feel I am living a life of lies.”

This intensely powerful essence is a magnificent confidence builder and allows true vision to emerge. It can break down the barriers behind which we hide, removing our false persona, our mask. We may use many strategies to disguise ourselves and for many reasons. Allowing our true selves to be seen makes for much more authentic communication. We can see others and they can see us. It opens a channel where healing can flow.

This essence helps those who wear a false identity behind which they hide, like the clown who weeps behind the painted smile. In other words, it may be for those people who have developed a false persona, and have no idea of their true identity. There is a constant “stiff upper lip” attitude that prevents a true emotional response.Or for someone who is cut off from reality, and is not at home either in their body or on this Earth. Perhaps they never fully incarnated. Interestingly, I used this essence to help a woman who was cross culturally/racially/class, adopted. When she and her family finally found each other years later they could not speak or understand each other’s language. She became intensely depressed, and lost. She was not hiding but she no longer felt she had any identity.